I find it telling that the sitcom The Big Bang Theory includes references to Blade Runner, and screenings of the 'Director's Cut' in the roster of nerdy titles to which its characters obsessively refer.  Telling because unlike truly nerd-worthy creations like Star Trek or Lord of the Rings/The Hobbit (which, after all, will embarrass anyone bold and foolish enough to attempt to dress like the characters from these stories), Blade Runner is a very sexy, un-nerdy movie and this says something about the aura under which Philip K. Dick's writing is now generally received in the world, i.e. as something sexier than it really is (Dick is a cult figure whose corpus of writing is a very mixed bag).  The Big Bang Theory's joke, of course, is that the Director's Cut contains only a few extra seconds, and that only obsessives would care.  The beauty of the joke is that gets to the core of something serious, and what that is is the subject of this review.

This review will address, among other things, the perception that Blade Runner 2049 is failing to live up to its earnings expectations because it lacks appeal to female audiences, despite Ryan Gosling and Harrison Ford playing key roles (Guardian, 2017).  It will also assess the movie's visual-poetic power (Roberts, 2006) and how it measures up to previous iterations, taking into account the 'inflation' of technological capability in the interims between both Do Androids Dream of Electric Sheep? (DADES) (Dick, 1968) and the movie it inspired, the original Blade Runner; as well as that between Blade Runner and Blade Runner 2049.

DADES is concerned as much with environmental and ecological catastrophe as it is with philosophical questions of consciousness and agency.  Especially in its early pages, DADES touches frequently on questions of animal rights, on humans as animal-types, and on the fascisms involved with the denial of the continuities that exist between humans and other animals, the consequences of which are experienced by future-humanity as mass-extinction, environmental catastrophe, and the potential complete abandonment of earth for extra-terrestrial colonies.

In Blade Runner we get only hints, allusions, and metonymies.  The owl at the corporate HQ where Deckard first conducts his tests visually metonymises the whole set of issues around environmental catastrophe, burnishing it in burnt-umber tones, filtered through tower-glass and Deckard's evolving love's fake eyelashes.  Something very fashionable has emerged in the space between DADES and Blade Runner, but it was not entirely absent in the former.  I would cautiously posit that any nerdiness, however, stems ultimately from the book upon which the two movies are based.  The reason for this is simply the medium and the time in which the book was written.  It was the sixties, and it was new wave scifi, but scifi it was, and that generates the distinct waft of the nerd.  This is where Big Bang has remained stuck, of course, as is appropriate to its subject-matter, but the references to Blade Runner the movie are therefore somewhat misplaced.

But DADES does have real sexiness, of course (as do the somewhat unrealistically sexy nerds in Big Bang), in the lone figure of Deckard, his love interest, and in the steampunk-apparatus-from-a-time-before (the catastrophe) such as we see in Deckard's office, for example.  There is always something distinctly retro in Dick, of course, and part of his brilliance was to play with senses of nostalgia and memory that appeal to both his characters and readers and, in doing so, lend an a posteriori necessity to the proceedings, and a synergy of feeling perpendicular to the plane of the page.  We can see, being attracted to civil-war era pistols and video screens in among vast piles of paperwork, that the future is past and vice-versa.  The boundary between steam- and cyber-punk is blurry indeed, and this why Dick was so inexorably before Gibson (Neuromancer) and the Powers/Jeter/Blaylock trio of steampunk. Dick was a priori the master, his times and spaces intuitive to the fabric of later imaginings.

The book, DADES, works with metaphor and text/words.  Its power lies in its ability to get the reader to sympathise with the ongoing set of concerns present in late-60s California (where Dick lived).  Blade Runner was more of the time of cyberspace, with the 70s already past and well into the 80s we were becoming comfortable with this idea.  We were past the idealisms of the sixties, into the materialities of the increasingly computational powers of everyday life beginning to fill up with 1s and 0s, a less organic and more binary era only hinting at what was to come.  This digitality will, I feel, make Blade Runner 2049 all the more powerful, as we are coming into a time when the digital nature of our lives is more seamless, when virtual realities run really well, and when every person has a supercomputer in their pocket.

The most interesting thing about BR2049 (aside from the visuals) is the trope of replication.  It is about material culture evolving through ideas that act like DNA.  In other words, the figure of the android is a metaphor for the idea of cultural evolution.  So, I think BR2049 operates at a much more metaphorical level than did the original Blade Runner.  The latter montaged its way through questions of identity and memory, leaving its conclusions in fragmentary form summed up in the parting poetic words of the last remaining replicant on Deckard's list.

The former (BR2049) is one big long, but distinctly unboring, metaphor.  Women might beg to differ on this point.  There's the prostitute-as-girlfriend theme running through BR2049 that climaxes in a synced 3-way augmented reality sex scene focused entirely upon the male gaze with Gosling embodying its centre.  There is here a powerful metaphor for technology and the idea of consent in a situation where the participants are all non-human.  Can non-humans consent?  If they are language animals, then yes (and they do); if they are not then the ethical question becomes a lot more complex.  But because they are neither human nor animal, does it really matter?  It seems to here because the replicants have emotions and can obviously verbalise their consent.

The scene is actually fairly gratuitous and peripheral to the cultural evolution metaphor the movie invokes.  The replicants/androids are staging a revolution, meaning the homegenisation of culture under the auspices of global capital.  This is Harvey's time-space compression taken to its logical conclusion and therefore the movie is anti-capitalist.  It is a bleak endgame and montage (again) of the destruction of humankind invoked by its success in the colonisation of the collective life-world, the environment (leading to catastrophic change), and runaway instrumental rationality.  The abject outcome is, paradoxically, the figure of the Blade Runner attempting to do away with the 'previous versions' as a sensitive soul, one that reads Nabokov's Pale Fire in its spare time and trades charming quips with his fake girlfriend.

There are some deeper questions about consciousness, identity, and memory being invoked in BR2049, but it is not ultimately some kind of boringly philosophical movie.  It is pretty riveting stuff, and I found echoes of Arrival (one of Denis Villeneuve's other directorial credits), and Mad Max within, but it is way beyond either of those two movies.

The other thing is, that where the first Blade Runner left some stuff out that was in the book (i.e. DADES), I felt the newer one put more back in.  The line between replicants and humans is blurry in DADES; less so in Blade Runner; but again more so in BR2049.  There is more 'animality' as well in the newest iteration, and one of the saddest scenes is of a dog being left behind in an abandoned apartment after its inhabitants have been removed.  This is a world in which the animal and animality is raised to a position of high value due to its scarcity; one where real wood of any kind is as precious commodity as gold, and these things too evoke Dick's novelistic portrayal of the brave new world of the replicants.

As a cultural phenomenon, the Blade Runner series will continue to replicate, as we only glimpsed the beginnings of the actual replicant uprising/revolution, something that was even more advanced only halfway into DADES.  BR2049 will be very tough to top, but it is exciting that directors like Villeneuve keep on trying.  BR2049, despite being a bit of a nerd-fest (and maybe because of it) is a great success, and we can only hope for more and similar cultural productions in the future.

Posted by Gwilym at 8:34 AM No comments: 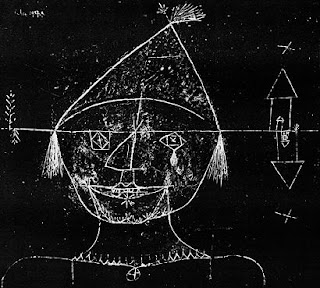 My forthcoming Contrapuntal Cartographies is going through a re-working after a summer in the field (Inverness mostly), and after reading Kant.

I'm now approaching the second half of Kant's major work towards being able to incorporate the whole as a key part of the theoretical framework of Contrapuntal Cartographies.

But what if they don't?

I'm anticipating that, as with the first half of Kant's Critique, the second will let me start to examine things, and especially maps, in new and unforeseen ways.

Because if we go into the question of representation, for example, assuming a universal and  transcendentally ideal subject, what are we to make of objects that don't seem to fit that mould?

What if not only the (indigenous) subjects we encounter, but also the objects of their belief, not only do not conform to our modes of cognition, but that the whole way of seeing is suspect?

After all, doesn't Kant's dialectic somehow lead to a monolithic god-thing in-himself?  This will be something to grapple with, even as I adopt the dialectic.

For the latter represents a logical and systematic way forward in the face of conflicting spatio-temporal data of the senses.  In other words alternate representations of the same phenomena.

One of those representations (e.g. property regimes in Northern British Columbia) will occupy a hegemonic position over alternate (e.g. indigenous clan) ways of seeing the very same 'thing' (the land).

The dialectic will treat the the production of maps from very distinctly interested standpoints that can be treated in object-like ways.  It will, for example, equally 'objectify' both white settler and indigenous positions.

Overlaying the maps produced by each kind of object (each of which in turn 'contains' distinct modes of cognition and representation) produces, in turn, a hybrid object or 'thirdspace'.

This new, third, space is a thing-in-itself, a contrapuntal image in a Benjaminian sense, that will then be added to a new iteration of counter-mapping, cognition, objectification, and analysis.