Anticipating the upcoming Determinism, Environment, and Geopolitics session at the Royal Geographical Society meeting in Exeter, I post some notes and slides stating my position.  The session is structured such that conclusions must emerge through consideration of possibilities discussed in situ, which motivates a certain pre-loading of content.

See Philip Conway's blog post introducing our session for some background on the debate.

My part of the contribution I have entitled "Hardy versus the Windfarms: Tess, Necessity, and the Geopolitics of the Anthropocene"

I begin with consideration of names as expressed in two publications. The first is Thomas Hardy's Tess of the D'Urbervilles. 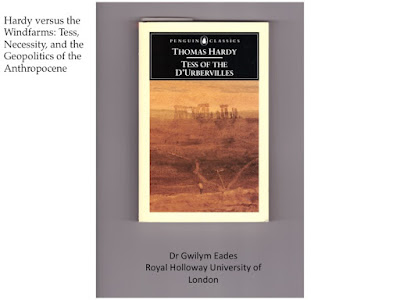 Consider Hardy's map of the fictional 'Wessex' below, a map that is included in all of his major novels. 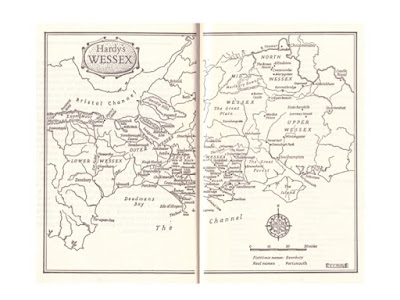 It has been noted of Hardy's novels that they map the 'real' territory very closely:

"Hardy’s Wessex is so familiar that it is hard to realize how odd it is that a novelist should have tied himself by so many strings to a particular tract of territory.  Many novelists have set their scenes in real places, or have written with some features of a familiar landscape always before them.  But Hardy has done something different.  Almost every step taken by his characters is taken along real roads or over real heaths; the towns and villages, the hills, even many of the houses, are identifiable. It is as if Hardy’s imagination could not work unless with solid ground under its feet, with solid objects to be seen around it.  Many of the characters, there is little doubt, contain more or less of one real person, more or less of another, with elements drawn purely from imagination or from the accumulated layers of experience, which comes to much the same thing.  But with the topography, Hardy was rarely satisfied with anything less than a one-to-one correspondence between the fictional and the real"

The slide below reproduces the list of places found in Hardy's novels, mapping them onto their 'real' names.  It also reproduces an inscription found at the beginning of Tess: "A PURE WOMAN: '...Poor wounded name! My bosom as a bed Shall lodge thee.' -- W. Shakespeare" 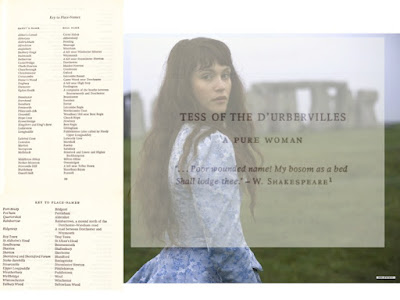 Tess, the idealised woman, is also the landscape of Wessex, stretching from Reading to Oxford to Bristol to Exeter to Southampton.  The larger area contains a smaller theatre of action that includes Stonehenge and Casterbridge (Dorchester):

"This fertile and sheltered tract of country, in which the fields are never brown and the springs never dry, is bounded on the south by the bold chalk ridge that embraces the prominences of Hambledon Hill, Bulbarrow, Nettlecombe-Tout, Dogbury, High Stoy, and Bubb Down.  The traveller from the coast, who, after plodding northward for a score of miles over calcareous downs and corn-lands, suddenly reaches the verge of one of these escarpments, is surprised and delighted to behold, extended like a map beneath him, a country differing absolutely from that which he has passed through” (Hardy, 1978, page 48)

"The forests have departed, but some old customs of their shades remain.  Many, however, linger only in a metamorphosed or disguised form.  The May-Day dance, for instance, was to be discerned on the afternoon under notice, in the guise of the club revel, or ‘club-walking’, as it was there called” (Hardy, 1978, page 49)

Proposals for windfarms for this part of Dorset have incensed locals. The one-to-one mapping of places like Dorchester have caused concern for its inhabitants that the places Hardy talked about will be ruined because the integrity of the landscape is threatened by the presence of machinery intended to address human induced climate change (global warming) brought on by fossil fuel consumption. 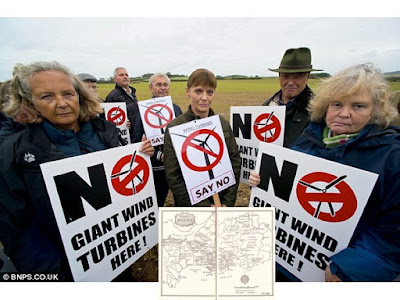 They are, in other words, motivated by Hardy's map, the ultimate representation of their home as a place of tradition extending back to a more innocent time (albeit one that Hardy demonstrates repeatedly is about to be ruined by human avarice and greed).

I posit that senses of Anthropocene, that named thing for representing all of human-induced change in one fell swoop, directly challenge Wessex and especially 'things' like the fictional Tess.  For all her lack of existence, Tess (and the Mayor of Casterbridge for that matter) directly challenges, albeit through conservative reaction, the idea that urgency around climate determines actuality.

I argue that names, their referents, and accumulated encyclopedic meanings and associated knowledges, are very important in discussions of possibilism such as the one represented by this session.  The last slide condenses my questions for the chairs: 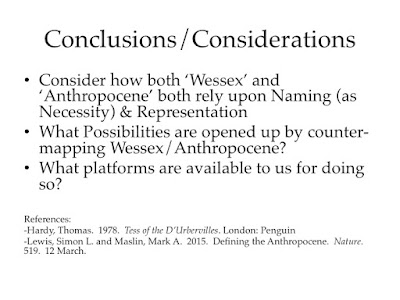 The second publication is, as noted above, Lewis and Maslin's 2015 article "Defining the Anthropocene" which is at one (very important) level, a question of naming, with a history and origin story of its own (quoting from my forthcoming book The Geography of Names):

"The ‘baptism’ of an epoch of earth-time defined by human influence can be traced to a theologist, Jenkyn, and a Reverend, Haughton, who called the present time the Anthropozoic, in which the very geology of the earth can in its essentials be defined by the presence of a human signature in its strata (Lewis and Maslin, 2015, page 172).  At present, there is no agreed-upon start date for the Anthropocene, but it is certain that it is a human-created term for referring to an epoch that both exceeds humanity itself, and that is defined by that humanity, for better or for worse.  The very idea of named divisions in earth-time indicates a very human need to name temporal phenomena expressed across geographic space and in the depths of the earth’s strata.  The idea of the Anthropocene is therefore both reflexive and subjective, when the subject is defined as the human species itself.  Other species do not have this notion of the Anthropocene nor, presumably, did proto-human species.  Would a future race of post-humans define things the same?  What about a Martian species?  These are matters of pure speculation, but they are serious questions, to be considered by philosophers and geologists/geographers alike.

For the present, should the Anthropocene, as a name, come to pass, it will be a particularly acute tool for political change.  The start date itself will cast judgment upon countries associated with, for example, the start of the industrial revolution, or on the other hand, it could end up playing into the hands of climate change deniers should the date be set early enough before modern-day humanity (Lewis and Maslin, 2015, page 171)

I finish with a poem and some suggestions for extending geography's concern across disciplinary lines.

we need new rituals
and performances for
actualising geological time

new symbols and counter-maps
for demonstrating
another world is possible
its properties, belief

interdisciplinary:
a remapping of possibility
engagement with the arts
and sciences of medicine, engineering, and law

ensuring the normative 'should'
has won

the demi-monde of the physical
cut off, the human becomes
a self-contained
possible world of one

a self-identical set, porous
talking to itself across a divide
half-human, post-natural

the name of the new geography
the thousandth plateau
self-similarity, looking to itself
as a re-presentation of the possible)

let's have a go instead
at seeing, feeling,
speaking outside the realm, the ultimate
climate-controlled discursive
comfort zone

engineering -- geo-engineering security
-roping the earth into conforming with human desires (the 'rodeo' 'can do' attitude)
-'fixing' the earth as technical -- e.g. windfarms

law -- of the air, of space, verticality
-atmospheres of environmental justice/justice for the atmosphere
-loopholes -- legal, territorial, cultural --

e.g. how do we 'get around' the Wessex-fixated/Hardy crowd: aren't their claims as legitimate as ours?

With these comments 'pre-loaded' I look forward to engaging in a very interesting discussion this Friday (4 Sept 2015) in the Peter Chalk rooms at 2.20 pm

Posted by Gwilym at 8:52 AM No comments: